In lay terms, GraphQL is a kind of query language and server-side runtime technology widely used for application programming interfaces of APIs that ensure that the client gets the required data. Nothing less or nothing more, and the QL in the name stands for the query language.

Created by Facebook in 2012 while crafting the FB app. GraphQL has a lot of aims and functions, at present it serves as:

GraphQL is here to empower API development and keep the API safety troubles as small as possible. This query language grants complete freedom to the API developers to play on the front foot and shape APIs as per their wish.

How Does It Work?

Created on the server, the base of this schema would be the data on which the app’s UI will be built. For instance, if making the chat application:

Once the schema is ready, it’s time to write resolve functions for each type. This is done to connect the data to the graph.

The query is sent as a payload to the GraphQL endpoint via POST. The GraphQL engine parses and executes the query against the corresponding resolver. Now, from the result from the resolver, GraphQL picks out the fields that are needed and sends them back to the user. GraphQL uses resolvers to get the data. This data is what the GrpahQL works against the query or mutation to know the action to perform. The query or mutation has a name as the resolver name so the GraphQL engine can match them and perform the necessary action.

The above example of a chat application resolver implemented in GoLang with Redis can look like this:

Write a Query for the Things You Want

Lastly, you start writing your query. You can specify the details you need to fetch, which works to the point. At this stage, using a GraphQL client library such as Apollo Client is highly suggested as it makes query writing an effortless task.

A GraphQL query is used to read or fetch values. The operation is a simple string that a GraphQL server can parse and respond to with data in a specific format. JSON is usually the popular response format for mobile and web applications.

The syntax to define a query is as follows:

Most discussions of GraphQL focus on data fetching. Still, any complete data platform needs a way to modify server-side data as well.

In REST, any request might end up causing some side-effects on the server, but by convention, it’s suggested that one doesn’t use GET requests to modify data. GraphQL is similar – technically, any query could be implemented to cause a data write. However, it’s helpful to establish a convention that any operations that cause write should be sent explicitly via a mutation.

Like in queries, if the mutation field returns an object type, you can ask for nested fields. This can be useful for fetching the new state of an object after an update.

GraphQL employs Subscriptions to deliver real-time updates from the GraphQL server to the subscribed clients. It is like using Socket.io to set up real-time communication from the server to the frontend. Here, GraphQL has it inbuilt into its functionality.

GraphQL has a specific endpoint or resource for the entire block of data. REST uses different data endpoints.

GraphQL works around schema, queries, and resolvers that allow one to work with a specific piece of data. On the other hand, what you ask for will reach you by passing from different REST APIs in the case of REST.

REST is a type of architecture pattern, while GraphQL is mainly a query language.

API development is faster in GraphQL when compared to REST.

Advantages and Disadvantages of REST

REST has been here for a very long time and is still popular. This popularity is not without reason. Users are bound to experience some notable benefits like:

Despite the promising benefits, it comes with significant drawbacks that include:

Advantages and Disadvantages of GraphQL

Be ready to experience some of the notable benefits like:

However, it’s not always a lucrative deal as it features certain drawbacks such as: 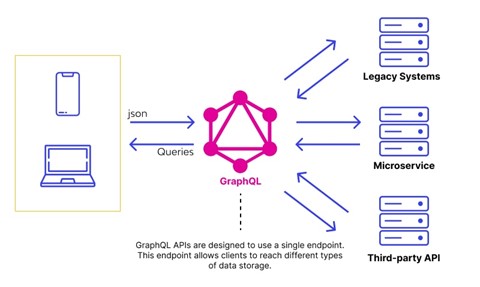 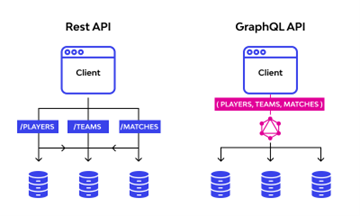 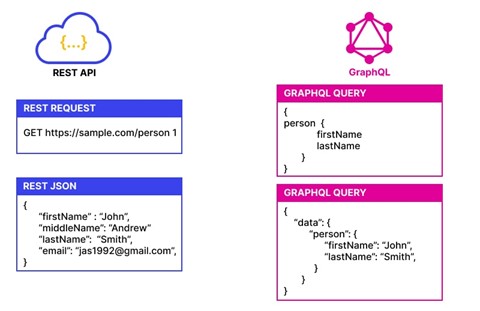 When Should You Use GraphQL?

GraphQL is an excellent solution to a unique problem around building and consuming APIs. When used as designed, it can be an ideal tool for the use cases described below.

GraphQL was designed to allow the client to ask for only the needed data. While the server might be able to deliver more data to the client for a single request, it would only send the data requested by the client. If you want the client to control the type and amount of data it needs, GraphQL would be ideal for your project.

Bandwidth is a problem for small devices like mobile phones, smartwatches, and IoT devices that cannot handle large amounts of data. Using GraphQL helps minimize this issue. Because GraphQL allows the client to specify what data it needs, the server doesn’t send excess data, which could reduce the app’s performance when bandwidth is limited.

GraphQL exposes a single endpoint that allows you to access multiple resources. In addition, resources are not exposed according to the views that you have inside your app. For example, if your UI changes require either more or less data, it doesn’t have an impact nor require changes on the server.